With the current trend going towards smaller, more conveniently carried tools, CRKT has once again managed to follow the crowd, but do it in their own inimitable way. Initially they shrank their first tools, the Zilla and Guppie into the Zilla Jr and Li'l Guppie , but the Cicada is something entirely new, not only to CRKT, but also to the multitool world. 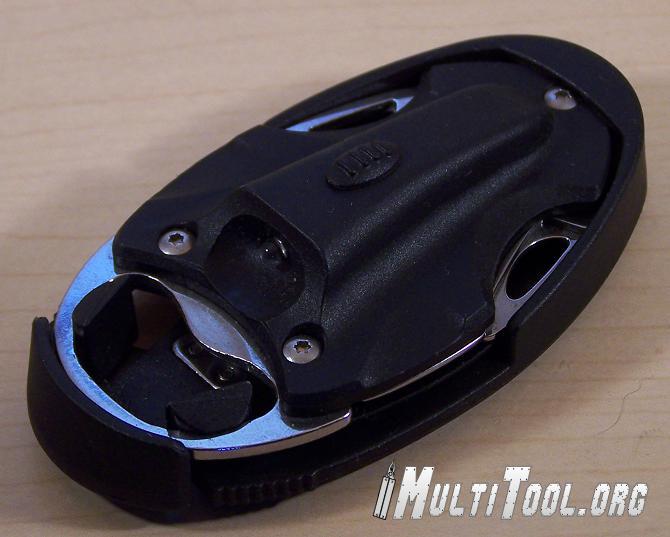 The Cicada is a lot of tools in a small package

At first glance it bears some resemblance in size and shape to a police badge as much as it does a Cicada, the beetle that not only gave it it's name, but also was very important to the ancient Egyptians. With most of the body of the tool being high impact plastic the second thing you notice is how light the Cicada is, which is a feature of great importance in the “small, convenient” tool category. 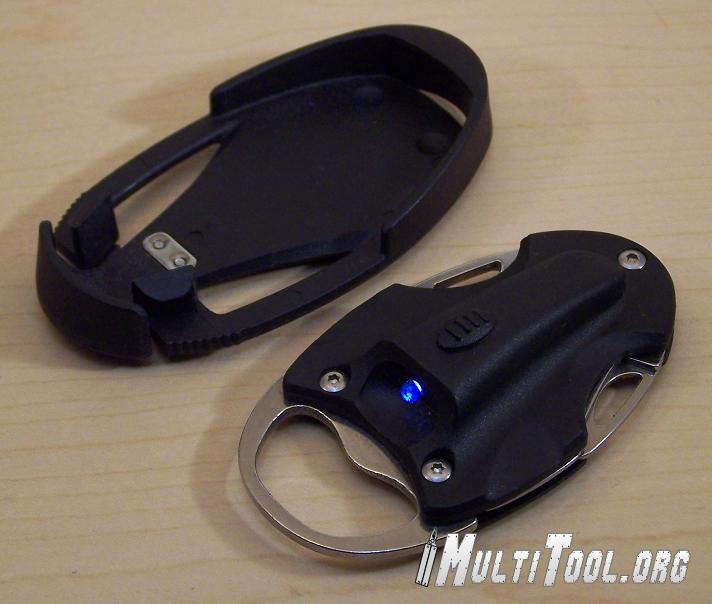 Don't let the size fool you though- the tool itself carries a full sized bottle opener, LED light, scissors and small blade, all of which are large enough to be useful, but not excessive so as to add bulk.

The blade is somewhat broad and very sturdy feeling for the size- while I doubt I'd want to dress a moose with this thing, it feels solid enough to try. Not having any moose handy, I found that it did a good enough job on day to day tasks like opening packages and boxes, cutting twine and the usual type jobs. Like the Guppie and Lil Guppie, the Cicada's blade is also a slip joint, so be careful when using it. 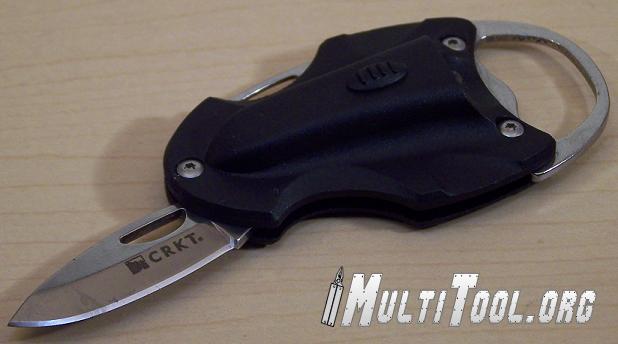 The blade of the Cicada is a nice leaf shape, allowing for a slight increase in cutting surface area

The scissors are also functional, although they look cheap- or rather they are similar in appearance to scissors found on cheap knockoffs, although I have yet to encounter anything they couldn't handle, be it tape, string or paper. They also use a spring system similar to that found on the Victorinox Spirit, so while they may not appear to be great scissors, they have been up to the task for me so far, and I really have no complaints.

It is noteworthy as well that while it may look awkward to hold and use the Cicada's blade or scissors, it actually isn't. You get a decent grip on the body of the Cicada by using the blade access cutout as a finger choil, meaning that your hand is not likely to slip during use. The scissors are also angled out from the body in such a way as to be very ergonomic in use. This is a welcome change from many small, convenient tools that trade user comfort for saving space. 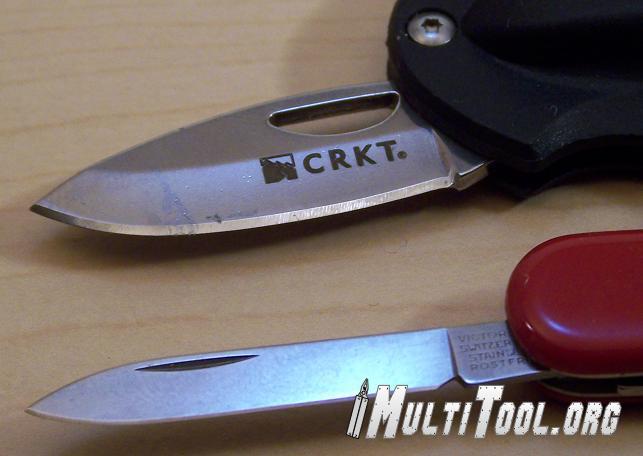 I didn't much care for the placement of the switch for the LED light. It's a great place when you are trying to use the light as it's easy to access, even while wearing gloves, but it's also easy to accidentally switch on when using any of the other implements, which I didn't much care for. When using it at night or in a dark environment this is ok as you will see it's on and turn it off, but if it was to be accidentally switched on during the day, it may go unnoticed for hours, or worse, noticed only when you need it. This is worsened by the fact that you will need a Torx head screwdriver to replace the watch cell batteries it takes. 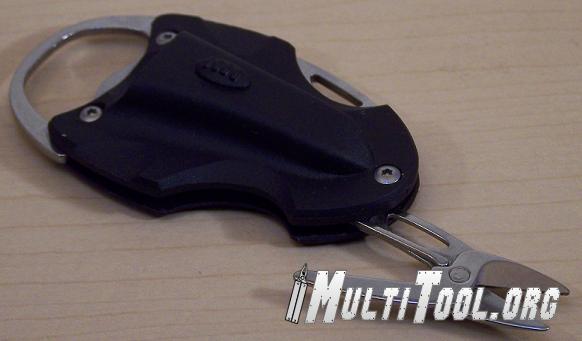 The scissors may be small, but they have a sturdy spring mechanism and broad blades to handle larger tasks

As for brightness, the LED isn't one of those types that allow you to blind attackers at 300 yards, nor will you be able to signal people on the International Space Station with it, but it is more than functional enough for day to day use- finding dropped itens, locating a key hole or peering into a duct. There is no reflector, and the LED protrudes from the body of the Cicada, so don't look down during use, and don't expect to illuminate anything more than a few feet away.

The bottle opener is perhaps the best bottle opener I have found on a small tool, which is no suprise as it's a full sized ring type opener, with no other function than opening bottles. The body is long enough that it provides good enough leverage to haul the top off a beverage in one quick movement.

The most original feature of the Cicada though is the clip. One of the many problems with these ultra convenient type tools is that they are often hung from keys or dropped in a pocket somewhere and can be awkward to find or use when you need them. Not the Cicada. It clips onto a belt, pocket or strap, and disengages from the clip housing for use, only to be re-attached when no longer needed. The Cicada fits snugly into the frame with a couple of clips that snap into the bottle opener ring, which hold it securely. When you need it again, simply squeeze the sides of the frame and the Cicada can be pulled out. This can be done in one simple motion 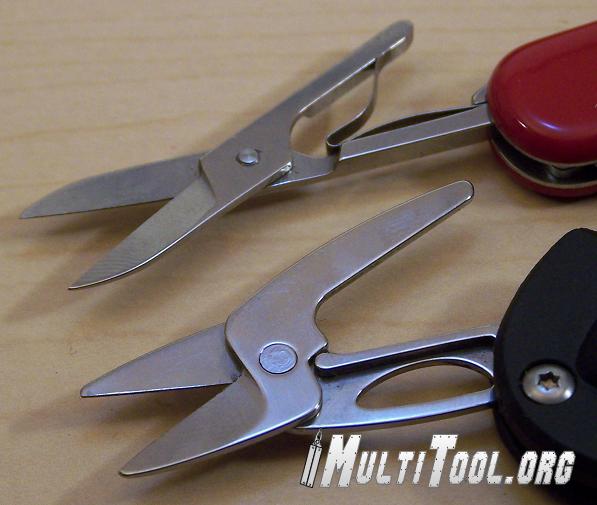 All in all, I like the Cicada. It is a very functional little tool, and a worthy add on to CRKT's multitool lineup, and a perfect example of CRKT's outside the box type thinking. It makes a great companion multitool as well, should one be carrying something larger. The scissors and LED would compliment a heavier tool like an original SwissTool , one of the Leatherman SuperTool series as well as CRKT's other offerings, the Zilla or Guppie models.

More in this category: « CRKT Get-A-Way Driver Review CRKT Flux Review »
back to top
Interested in this or a different tool and still have more questions?
Why not join us over on the Multitool.org Forum where our community can help you find what you're looking for!