For all those places when you need or want a tool handy, but can’t carry a full sized tool for whatever reason, Leatherman offers the Squirt series, which consists of three models- the E4 with wire strippers, the S4 with scissors and the P4 with pliers, which is the model we are looking at in this review. 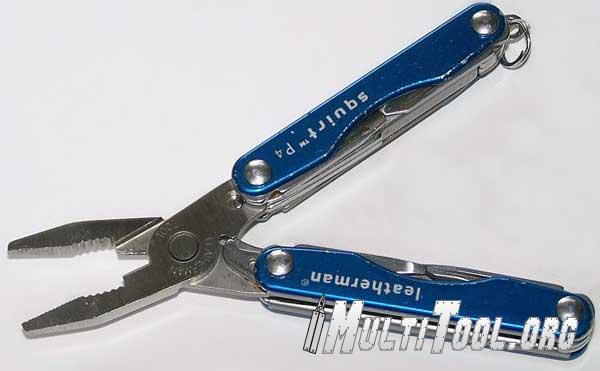 The P4 is available in grey or a bright vibrant blue which I prefer because it’s easier to spot if you put it down somewhere or drop it. In the woods or in the workshop another hunk of silver/grey/chrome just disappears along with everything else. The Squirt series arrived on the scene around the same time as the Juice series of slightly larger tools and the bright colors of each tool set compliment each other. It is nice that Leatherman does offer the series in the grey as well for traditional types who prefer tools that just work and aren’t flashy.

The most important feature of the P4 isn’t the color though- it’s the pliers. The pliers are spring loaded, using the same reliable spring system as the Micra. This isn’t the most exciting spring system design out there, but it is perhaps the most durable, and I agree completely with Leatherman’s choice to keep using it, unmodified. If it ain’t broke, don’t fix it, and there is absolutely nothing wrong with it. The pliers themselves are a fairly robust (for such a small tool) “halfway” type plier. They are halfway between a blunt and needle nose plier design and so should function fairly adequately at most jobs requiring either one. The plier head also incorporates a small bypass type wire cutter at the back of the mouth, and a small hard wire notch at the opposite end of the pivot, between the handles. For such a small tool I wouldn’t attempt anything too heavy with it, but it made pretty short, clean work of a paper clip.

In addition to the different main tools, the Squirt series all differ slightly in tool complement as well. As with all Squirt models, all the tools are outside opening so you don’t have to open the pliers to get at them. As with almost all keychain sized tools, the implements don’t lock open, but the backsprings manage to keep the implements open more than satisfactorily. Again, a keychain tool shouldn’t be used for anything too serious or heavy, and as always, care should be exercised when in use.

The P4 is equipped with:

Each of these implements is well made in Leatherman’s typical fashion and functions well enough. The blade is the same blade that I thought very highly of in my Micra review, simple but functional, and the choice of an actual file rather than a typical keychain type nail file is interesting. I think overall I would have preferred a nail file, but I certainly can’t fault Leatherman for trying something different. Initially I also wondered about the decision to include the awl, but the more I thought about it, the more it made sense. If you wanted to drive a screw with such a small tool, the job would be made immeasurably easier if you had a pilot hole, and the awl is perfect for that. Of course, be wary when using the awl to dig pilot holes as it does not lock and twisting motion could cause it to fold. The good news is that it’s small enough that it’s not likely to cause any significant damage to you if it does! 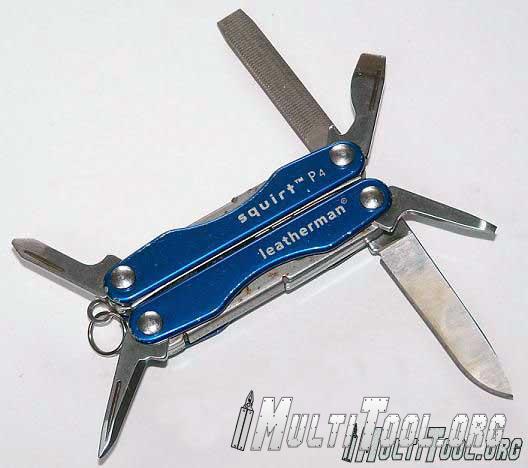 The eyeglass screwdriver is in my opinion, one thing that no key chain tool should be without. Whether you wear glasses or not, you will likely encounter people that do in the course of your day, and the small eyeglass screwdriver could be a lifesaver and make you a hero each and every time you have to use it. Even if it’s never used on glasses, the amount of small electronic devices in the world today means you should get used to dealing with small screws! This one is a dedicated small screwdriver with no other functions, and it works well, as my sunglasses will attest.

The phillips driver is a simple “pointed flathead” type which works well enough, but I don’t personally care for. If the bottom line to you is function, then it is fine, but I would rather have seen another flathead (or anything else) in it’s place as it functions just like a flathead. The only difference is, with the point it seats slightly better in a phillips screw head, but at the same time it renders it useless for anything else. A flathead would work just as well in a phillips screw and also function for flathead screws. I even went so far as to test it and a Squirt flathead screwdriver on every phillips I could find and I noticed no difference between them.

Speaking of flatheads, the bottle opener and flathead screwdriver is the last implement on the P4, and I have to say I have mixed feelings about it. I like the dual function idea, and the screwdriver works well enough, but the bottle opener isn’t terribly effective. Like most of the other tools it works well enough when something better isn’t handy, but compared to other keychain tools, it just isn’t very good. While tools like the Leatherman Micra, the Victorinox Rambler or Wenger’s Pocket ToolChest simply flip the cap off, expect to have to lift the cap in a few places with the Squirt until you can lift it off. Again, good enough when nothing else is around, but if you are looking for a good bottle opener, you may want to look elsewhere.

The Squirt series is an excellent set of tools overall, and will pay for themselves in sanity the first time you need one and have nothing else handy. Like many other keychain tools they are readily available and somewhat inexpensive since the TSA started cracking down on these types of things after 9/11. As with most keychain type tools I would suggest a quick release clip of some kind if you want to attach it to your keys, as their usability increases when you don’t have to work around the car alarm, carabiner etc that also live on your keychain. I personally like the On/Scene Tactical kydex rig, which holds the Squirt securely yet keeps it handy and easily detached.

More in this category: « Leatherman Charge TTi (Sec3D) Review Leatherman Squirt S4 Review »
back to top
Interested in this or a different tool and still have more questions?
Why not join us over on the Multitool.org Forum where our community can help you find what you're looking for!