Kobalt by Lowe’s Multitool Review
Nov 20 2008
Reason for purchase:
On the ever-present lookout for “the” tool that is perfect for all applications we once and a while comes up with issues that are unseen and another tool is necessary. It was about 2 years ago that I lent a brand new Surge to a co-worker that returned it in the most abusive manner by skidding it across the shop floor a total of about 50 feet. Then the search came to be to find the ultimate loaner tool and beater.

Fast-forward 1 year and while walking through Lowe’s I decided to look into the tool area to get a new SOG. Sitting on the shelf there was the Kobalt Multi tool. At a cost of about 15$ I decided that this would be a cool tool just to keep in the car for a beater, but found the thing to be a really useful implement. 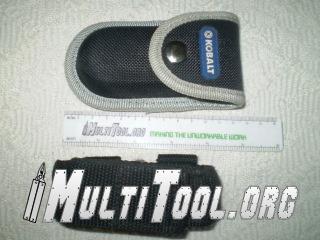 Overall:
The tool came in a great package that allowed the buyer to see the tool with all implements out. It had come with a sheath that was actually usable, and it was a heavy tool. At 10 oz. with the sheath it will not be a tool that you will forget that you are wearing. It is closed at 3 ¾ inches or 9.5 cm the tool opens to 6 inches, and is ¾ inches thick. Tool shown in comparison with the wave that is usually carried at home. 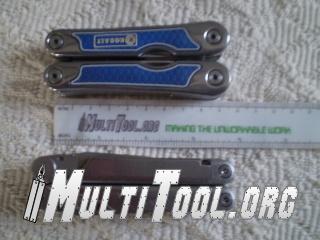 Side photo with wave: 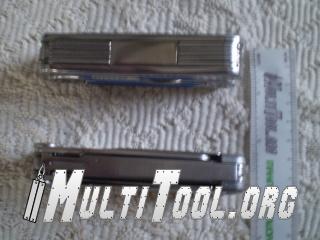 The tool comes with a great insert made of rubber that gives some grip and it really does give the tool a little class with the polished steel and the Kobalt blue grip. Though the tool is a bit on the heavy side, the very nice thing is that the grip of it is thick and beefy without being too unwieldy like the Gerber Suspension. Pliers on the tool come with a Very small hard wire notch that easily handles coat hanger and welding wire with ease. Also the head of the tool is spring-loaded and the spring is internal so it will not become lost. Though the plier’s head is smaller it does perform all tasks in an adequate way. The spring-loaded head has very aggressive teeth and I found it comfortable to grip up to a 9/16-inch bolt, and was easily able to grip it with force. Though the tool has no implements that lock, every piece of it has a “snap” when they click into place, and all tools have their own back-spring, not a common thing on most tools that will share a common back-spring. The tool is readily available at all Lowe’s and if broken can be returned without any questions for replacement there. So the tool also has a very excellent warrantee.

The sheath that the tool comes with is very reminiscent of the old Bianchi Mag pouches that were first issued with the 9mm. It is an accumold type design that is covered in a heavy cordora covering, and holds the tool very securely with a simple but stout button snap. It rides a little higher on the belt than the Leathermans, but will easily fit up to a 2-inch belt. I was able to crawl in and around the truck at work without it snagging and catching on anything. I actually would love to see the higher end tool companies make a sheath that the bargain basement company has come up with. 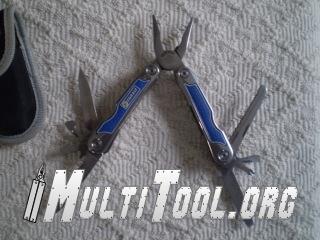 Cutting blades.
I actually was fearful of them. I have become accustomed now as most to higher end steel that have become commonplace in today’s market. The tool comes with 2 blades a Drop point blade that measures.2 ½ inches, and is Hollow ground. While the steel is not premium, I actually would not say it is any worse that the average Wenger or Victorinox steel used today. It takes a great edge, though dulls quickly, can be retouched with a Diamond stone with very few passes. However the Serrated blade is kind of weird it does actually work but not as well as most. It has a duel-serrated pattern on it that has VERY aggressive teeth. Wider in the back than the front. I found it almost impossible to cut rope with due to the teeth but would open packages and cut fabric like a chainsaw. The cutting length is the same as the straight edge so they both work very well for general cutting.


Saw Blade on the tool is 2 ½ inches long and was the part of the tool that I was certain would be junk, however I was pleasantly surprised that the blade had been Hollow ground, and though the teeth not up to Victorinox standard did perform well. You will not break any speed records with it, but the tool does cut, and the teeth had no problem with clogging cutting green wood.

File on the tool measured also in the 2-½ inch range. This part of the tool was actually the most disappointing part. I found that the file would only work on wood, and soft brass. As a file user on my tools I understand that the implement is the hardest to manufacture, but they could have just left this part out. The steel used is the same as the whole tool, and has nothing for heat treatment. Though there is not really anything positive about it, I would have just left it out of the tool and maybe just put something else in its place. Maybe an awl, or just adding a lanyard loop in its place.

Can and bottle openers on this tool while nothing spectacular are functional. However the can opener will only work for you if you are right handed, and does come with a little straight driver ala Victorinox. The cutting edge on the tool came sharp enough but was very small, and it takes a time to work itself around a can. Positive side is that the ergonomics on it will keep the cutting in line, and will cut rather cleanly. Bottle opener on the tool also performed adequately and comes with another straight screwdriver blade on it.

On the tool is also two other straight screwdrivers present. However they provide no real reach over the can and bottle opener drivers, and coincidently are the some size! Go figure out that one. All straight drivers preformed ok but will slip on really tight applications due to the chisel grind used on the tool. I would have rather seen them take the 5 seconds to cut into the other side of the tool, but what can you expect from a 15$ tool?

Phillips bit on this tool is the same kind of driver used on the Vic tools. It appears to be stamped and is on the #1 size so it will work for most fasteners. All the drivers present on the tool gave the exact 1-inch reach.

Cons:
Heavy.
File will not be of use.
Can opener could use larger cutting blade.
Serrated blade has way too high peaks.
Redundant drivers.


Overall I would certainly recommend the tool as a backup tool in a box, or just a beater. It works extremely well for the cost and can be exchanged at any Lowe’s around the globe for a new one when it breaks. If you also need a cheap but decent gift give one. I would give this tool a solid 6, which I find to be extremely fair (considering I would give the Gerber Suspension line of tools a 2).  Also It is obvious that like most tools that come from a supercenter that the tool being reviewed is made overseas in China and distributed by Sheffield.

More in this category: « Crescent Toolzall Electrician Pro Review R&H pipe smoker's multi-tool Review »
back to top
Interested in this or a different tool and still have more questions?
Why not join us over on the Multitool.org Forum where our community can help you find what you're looking for!