When Buck teamed up with Outdoorsman Peter Whittaker to create the next line of multitools, I don’t think Buck thought they would be as popular as they ended up being. Buck was defiantly bold when they pushed forward with a design like none other; a tool where all the tools are opened with one hand. This vision and determination has gotten Buck back into the multitool market and given the tool community a product that is both of quality and totally unique. Since its release Buck has produced their original X-Tract model, the LED model (a basic X-Tract with an LED) and the FIN which adds a plain edge blade and scissors to the tool. It was only natural for Buck to take the next logical step and do what X-Tract fans have been yelling about from the start, make the X-Tract with a pocket clip. 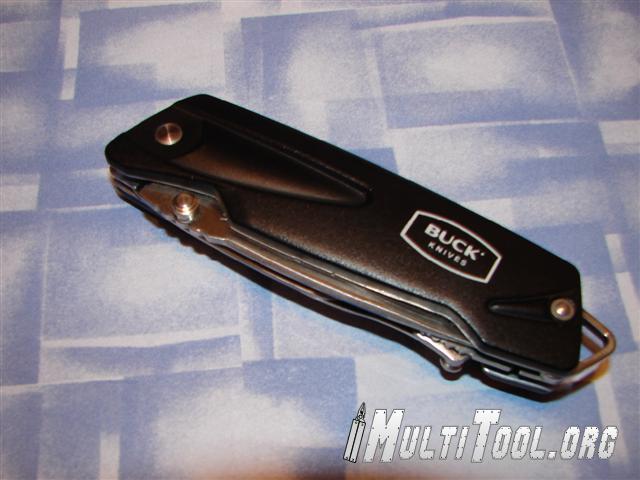 When you have a one hand opening knife/tool it was defiantly the way to go, with the huge success of tactical knife sales it was only logical for Buck to hop on the bandwagon. In order to make the tool more comfortable in the pocket but not reduce the function of the tool; they looked at the X-Tract and found that while the pliers were useful in a pinch they were not as good as those found on a dedicated plier based multitool. So they tossed out the pliers and were able to thin it by quite a bit, add a pocket clip and you have the hottest new X-Tract, the Essential.

The Essential is just what the name implies, it has all the functions the average tool guy needs and nothing he doesn’t. The Essential is following in the foot steps of other tools that are catering to people who don’t use all the tools on a multitool. Yes it’s true, we all are not die hard junkies, and it’s nice to know some folks out there like Buck actually listen to us.

When they took out the pliers they also did a few other tweaks as well. The LED and FIN models both feature a rubber like surface on the handles to keep the tool from slipping when you have wet hands. Buck opted to use regular plastic handles because the rubberized sides would make it more difficult to remove the tool from your pocket. The FIN was a change for the series because it featured a plain edge blade, most folks don’t like serrations and they decided to keep the plain edge but kept it polished rather than bead blasted. I don’t see why they didn’t keep it bead blasted, unless they wanted to make it a unique tool in comparison to the FIN. 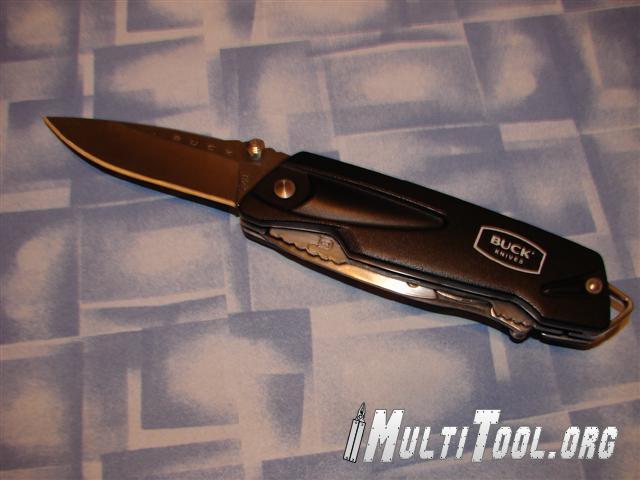 What made the FIN a popular model for Buck was the addition to scissors to the already popular X-Tract. Most folks prefer scissors to the rarely used can opener and once again Buck listened to the consumer base. The Essential features scissors like the FIN but that is where the similarity ends, Buck took the idea and like a fast food restaurant they super sized it! The scissors on the Essential have got to be three times larger than those found on the FIN. Of course, bigger isn’t always better, with the increase in size there are some difficulties. I find with smaller scissors like those found on the FIN, you have a decent amount of leverage to cut the material, the Essentials scissors are so huge they don’t have as much leverage and I find them having difficulty cutting material such as twine and think plastic straps (like those on packages). If you’re cutting coupons then the Essential will do just fine, but anything heavy duty I would leave reserved for the blade.

The drivers are still the same as those found on the rest of the X-Tract line, they work well in spite of being some what limited due to handle design. They may be limited but the one handed access option makes them a keeper and always at the ready for that job that pops up. 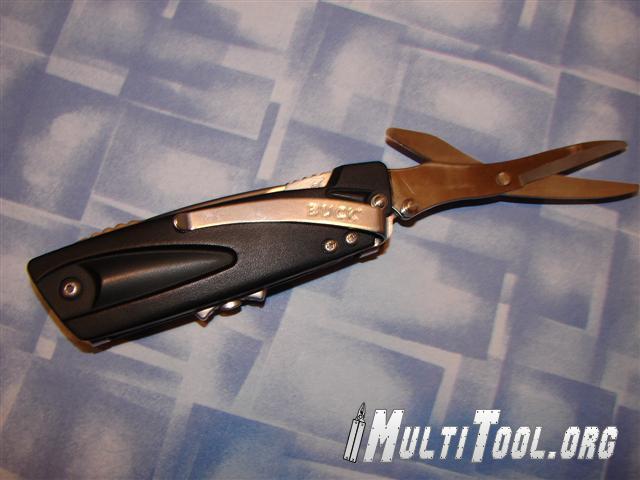 The real shining moment for the Essential is the pocket clip, featuring a clip which is reminiscent of the Buck A.S.A.P line the clip is a little different that most clips. The clip is screwed to the frame and doesn’t ride straight up and down like a normal clip but rather rides diagonally across the tool. I thought it was a little crazy in the design but like my Sirus it rides pretty good and I think the style is just something Buck likes to do to be different. The only problem with the clip I encountered was the thumb stud for the scissors can get hung up on your pocket when trying to take the tool out. Not a major problem, you simply twist the tool slightly while taking it out of your pocket. Guess it was a small problem that was over looked because there was not much they could do about it. 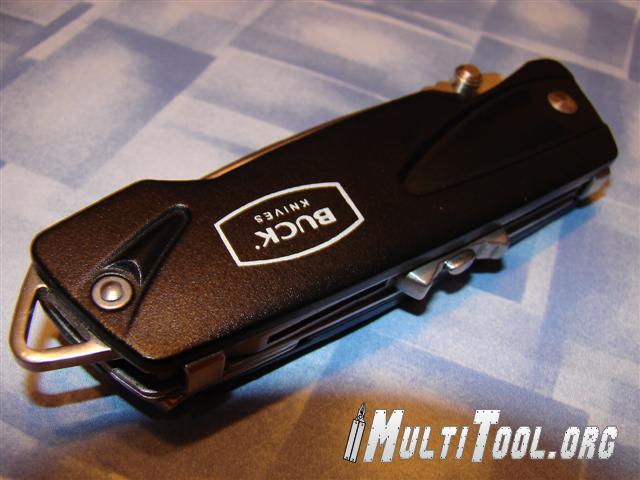 In the end the Essential is a much welcomed addition to the popular X-Tract line. The bigger scissors while kind of a flop are still useful and Buck has put together a winner in my book. I really don’t know how much more Buck can milk the X-tract line before they run out of ideas. Course I will be right there to test it and see how it stacks up. If you already own one of their tools and like it, I suggest you pick up the Essential.

More in this category: « Buck FIN Review Buck Metro Review »
back to top
Interested in this or a different tool and still have more questions?
Why not join us over on the Multitool.org Forum where our community can help you find what you're looking for!