Swiss Army knives have come to be loved and used by virtually everyone all over the world, you see someone using one and you immediately know what it is. Being very popular and people friendly, the versatile Swiss knife has been a trusted companion to many of us. 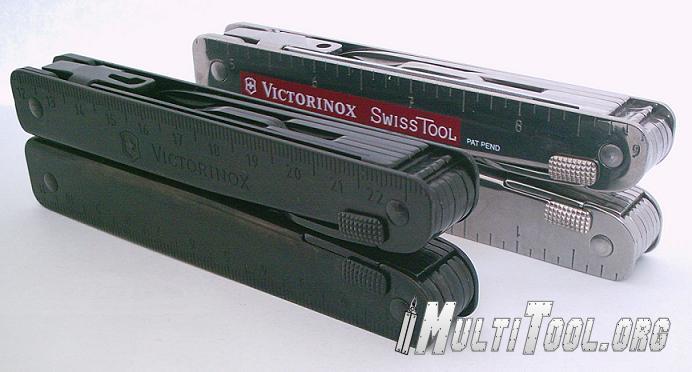 The Original SwissTool is available in two finishes

Victorinox, based in Switzerland is one of the companies who manufactures these knives, the other is Wenger. Victorinox is very competitive in pricing and they are always coming out with new models to better serve the people of the world. Victorinox was the first company to technically make "multitools" and it was only a matter of time for them to create one that was based of the "Leatherman principle" we can call it...everything must center around pliers. Leatherman's ingenious design is world renown and everyone from Buck to SOG has hopped on the multitool bandwagon and this is Victorinox's answer to the multipurpose tool. 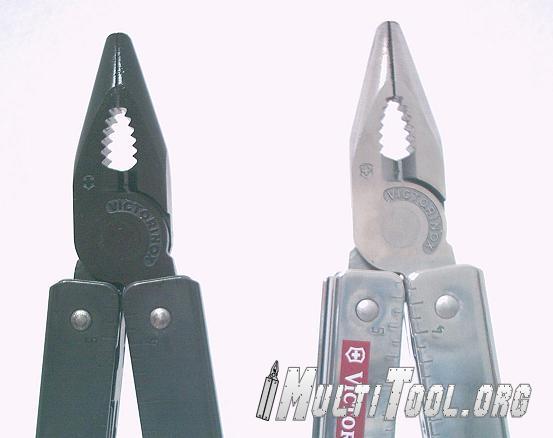 The Swisstool is as finely crafted as their smaller brothers and just as handsome, Victorinox has taken the next approach to tool design and made the tools accessible from the outside of the tool while it's closed. No more need to open the pliers to get the tool you need. On top of that every tool is spring loaded on little back springs that keep each tool in place and when you take one out via a nail nick the others don't come out in a clump style fashion like you get with Leatherman tools. Every tool on the Swisstool is a beefier and stronger version of the pocket sized ones you are used to using, the new chisel/wire strippers are a joy to behold. Most of the tools available are those most commonly found on the Swiss Champ series, you get a knife, saw, file, awl, an assortment of screwdrivers, can opener, etc. The only problem with the tools is the same you get with the pocket knives, because they are so polished they can slip in a screw head very easily and not grab as much as they could if they weren't so polished. But because of this polish they are able to with stand corrosion like you wouldn't believe. Heck Victorinox even recommend that if it's really filthy you can run it through you dish washer, how many manufacturers can claim that! 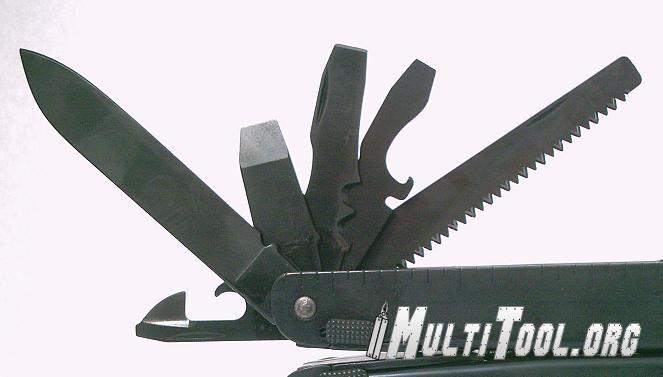 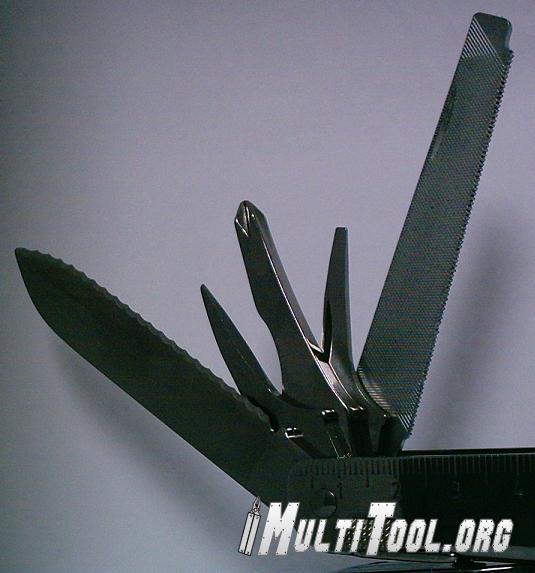 The SwissTool features an awesome assortment of tools, all of which lock

On a size scale the tool is more along the size of the Leatherman Supertool , but it's much more beef that what the Leatherman dishes out, featuring double laminate handles for extra strength, stronger posi-stop pivots for the handles when opening and closing and a stronger hybrid plier head that is neither needle-nose or blunt. When you close the tool you get a very authentic snap that you love to hear and you know the quality in that snap from years of craftsmanship on their pocket knives.

Victorinox made the SwissTool massive to compete with Leatherman's SuperTool

The thing that separates the RS and the CS Plus is that the RS is equipped with a rescue style knife blade, could RS mean "rescue saw"? It's more like a curved seatbelt cutter and would work real good in the feel for getting someone out of a car in a hurry. Question is how long would it take to get that tool out and open that blade, probably not nearly as quick as a rescue knife like those already in use today. Good idea but I don't know how many EMS and Rescue units will carry it for this fact. Many of them in fact have told me their single most used tool on the job are their "penny cutters", those industrial strength scissors they use to cut peoples clothes off in an emergency.

The CS Plus has scissors in replacement of the rescue blade and a corkscrew attachment that slides into a slot on the side of the tool, which can also be served as a lanyard loop. The CS also comes with a hex bit tool kit that has five bits and 4 spaces free for you to add what you would most use on the job. The hex driver is kind of an "L" shaped tool that can accept the bits on either end and they lock into place with a ball-bearing lock ring. Having one end straight and the bent gives you different ways to add torque to the screws. A nice addition to the tool and defiantly expands it's usefulness.

Overall the Swisstool is one of the biggest and baddest tools on the market today and will hold it's own in competition with the best of them. The ease of use and commitment to quality will make it a definite pick for those veterans who use their knives and those who need a tough tool for the job. If you don't mind the weight of the tool this is the perfect for you, if you need something smaller Victorinox is making a smaller version of the tool with true needle-nose pliers later this year called the Spirit. It's as small as the original Leatherman and packs all the goodies in their Swisstool series.

More in this category: Victorinox Spirit Review »
back to top
Interested in this or a different tool and still have more questions?
Why not join us over on the Multitool.org Forum where our community can help you find what you're looking for!