Emerson knives have been a dominating force in the knife industry since 2000 and everyone from military to civilians depend on their knives. Ernest Emerson over the years has collaborated with different people and has produced some incredible knives as a result. One of those calibrations is with Multitasker tools; a  company which manufactures tools for AR15 military rifles. Emerson approached Multitasker and said they were interested in producing a multitool to compliment their lineup, Emerson and Multitasker sort of occupy the same market so it was a no brainer. The result was a tool that was basic in function and a great addition to any EDC. 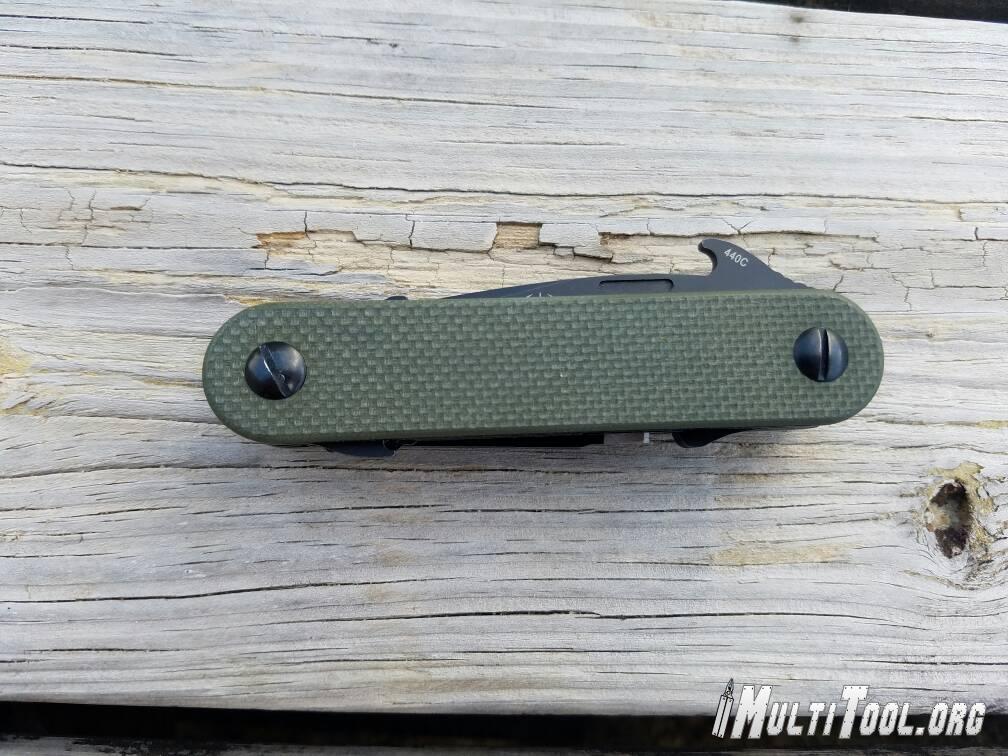 The original EDC was Emerson's first multitool; it featured a flat driver, phillips driver, awl and the iconic wave feature for opening the main blade. Those new to Emerson may not know what the wave is. Emerson knives have a hook on the spine of their knives that allow the knife to catch on your pocket when being pulled out. This allows the user to open the blade very fast and without the use of your thumb. The EDC tool also featured a pry bar/wrench that was removable and could be stored on the side of the tool.  The EDC sold rather well for Emerson and Multitasker was asked to make some requested changes to the design and the result is the EDC 2.

The EDC 2 is an improvement on the original and has even shed some weight by removing the addition pry tool. The drivers on the tool are locked into place via a patented lock design similar to a pocket knife and can be locked at either 90 or 180 degrees. The flat driver has a hollow ground edge and fits a majority of flat heads. The phillips driver is what I call a 2.5D head, it's a modified 2D head so that it resembles a regular phillips and can fit better than most 2D styles. The phillips is more a #1 style rather than a #2. I found the head fit most phillips screws but would not bite into some of the #2 style. Having the ability to lock these drivers at 90 or 180 come in handy when you need to apply some torque to the screw. 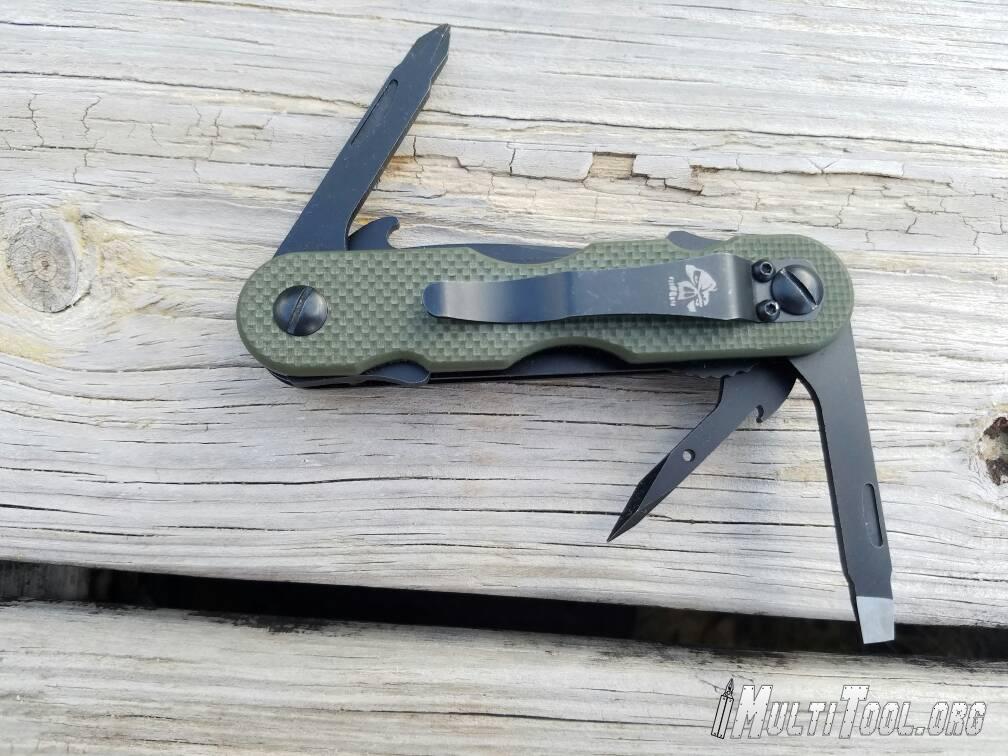 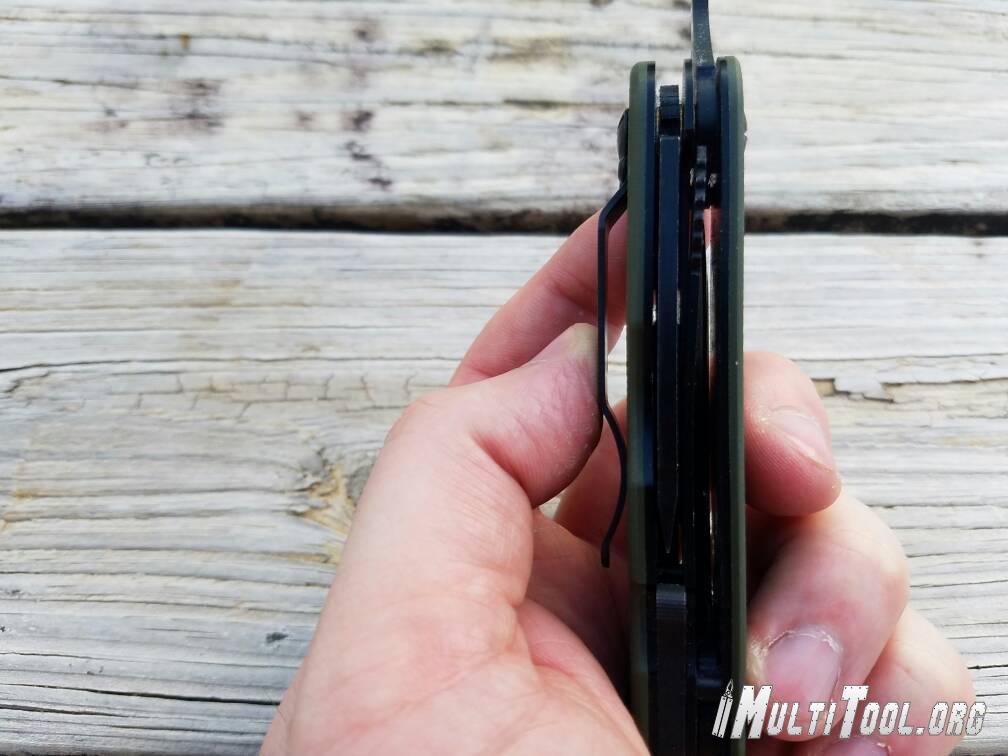 The main blade is a design by Ernest Emerson and is featured on the Commander line of knives. The blade features a deep belly and comes with the waved feature on the spine of the blade. Removing the tool from your pocket and pulling back towards the seam allows the hook to catch and will snap the blade open. The blade features a typical "V" grind which is good for your average Joe because Emerson typically has a chisel style grind which I have a hard time keeping as sharp. The blade is made from 440C stainless steel, not a high end steel but for a backup or utility blade you don't need anything that's high end and hard to sharpen. 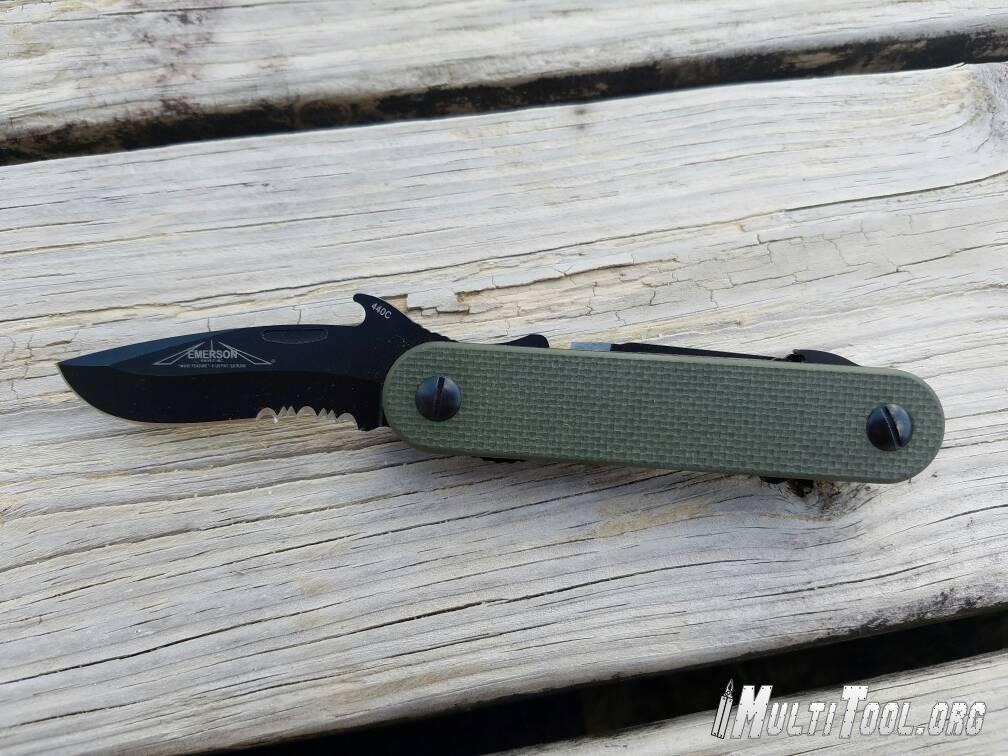 The last tool on the EDC is the awl; there is much debate on our forums about who actually uses an awl and what purposes they use them for. The awl is a great tool used for reaming a hole in wood, leather or other material. It works great for scoring wood when taking measurements, etc. It appears limited in function but it's only limited by your imagination. I remember before this tool came out I did some tests on various awls for Multitasker to see which designs work better than others. I was pleased to see this style made the cut and ended up being featured on this excellent tool. 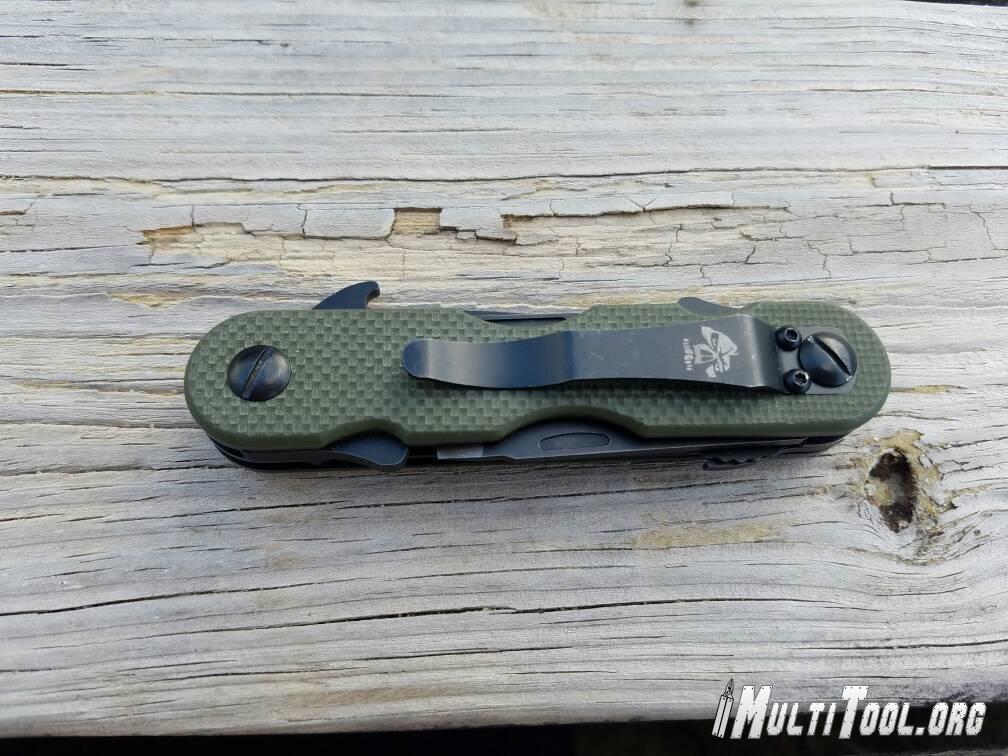 The tool carries easy in your pocket thanks to the Emerson style pocket clip. The tool rides pretty deep in your pocket and is held tightly by the wire clip. The G10 handles provide a significant amount grip; not only does it keep the tool in your pocket but in your hand when in use.

The tool is a real tough tool which is built for the long haul. The tools are precision cut using wire EDM and black oxide coated. The end result is a tool that has very close tolerances and will not get scratched or worn easily. I love the fact that is screams Emerson and looks a lot like my Emerson mini A100 knife. This tool is like a Swiss Army knife on steroids and is a testament to the quality of Emerson and Multitasker tools.

If your looking for an excellent tool to compliment your other tools or just a tool to handle everyday chores the EDC2 is an excellent choice.

More in this category: « Piranha Multitool Review Schrade Tough Tool ST11 »
back to top
Interested in this or a different tool and still have more questions?
Why not join us over on the Multitool.org Forum where our community can help you find what you're looking for!