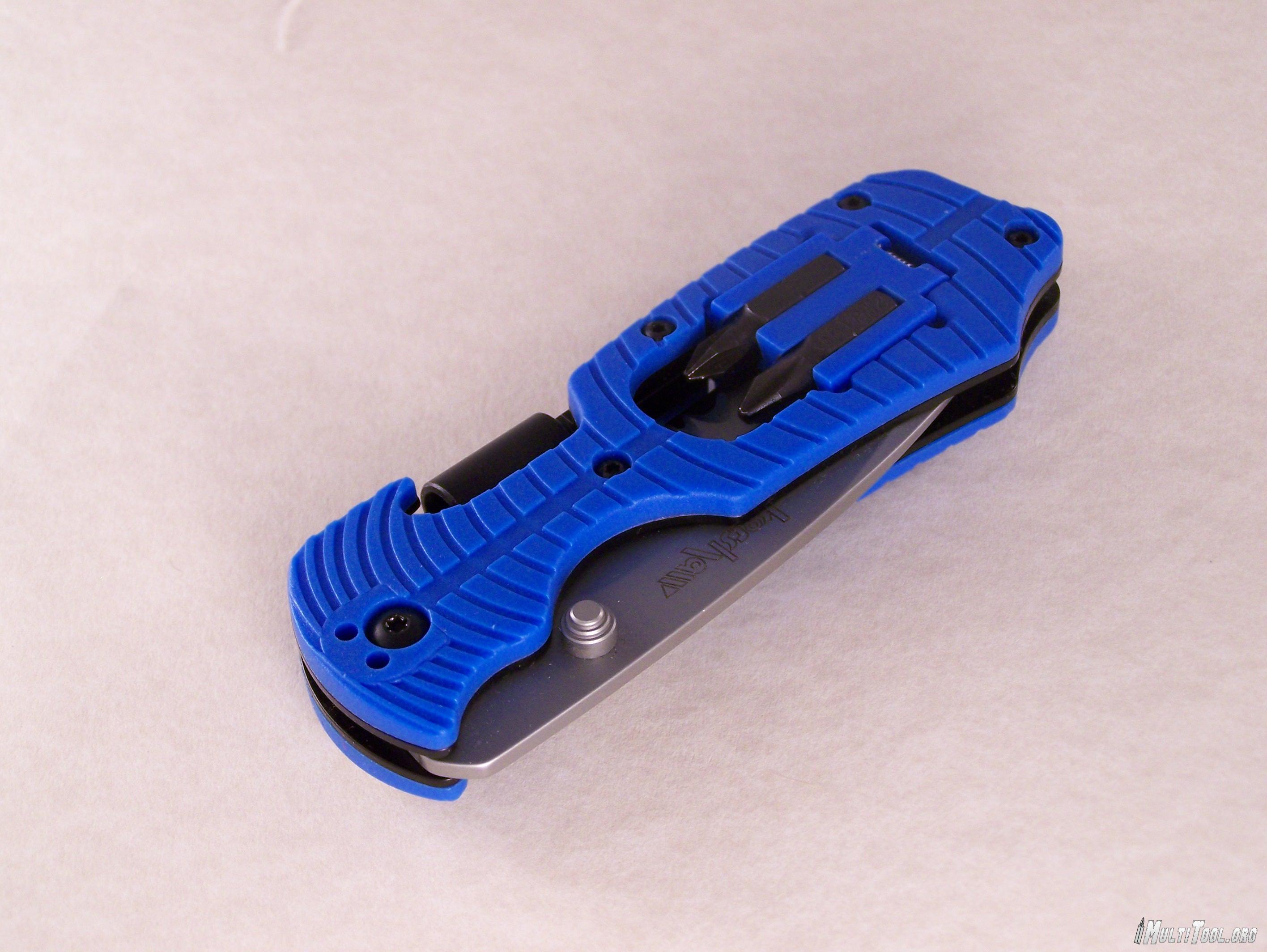 When one thinks of multifunction tools one tends to think of folding plier devices and when one thinks of multifunction knives one tends to conjure up the typical Swiss Army type knife. The Select Fire from Kershaw actually manages to take features from both without losing it’s tactical knife-y-ness as well. On the surface it’s a one handed opening, partially serrated liner lock with a partially serrated blade, injection molded handle scales and a pocket clip. Not only that, the pocket clip can quickly and easily be swapped to the opposite scale for left handed users and the large, ambidextrous thumbstud won’t be leaving Southpaws out in the cold either. 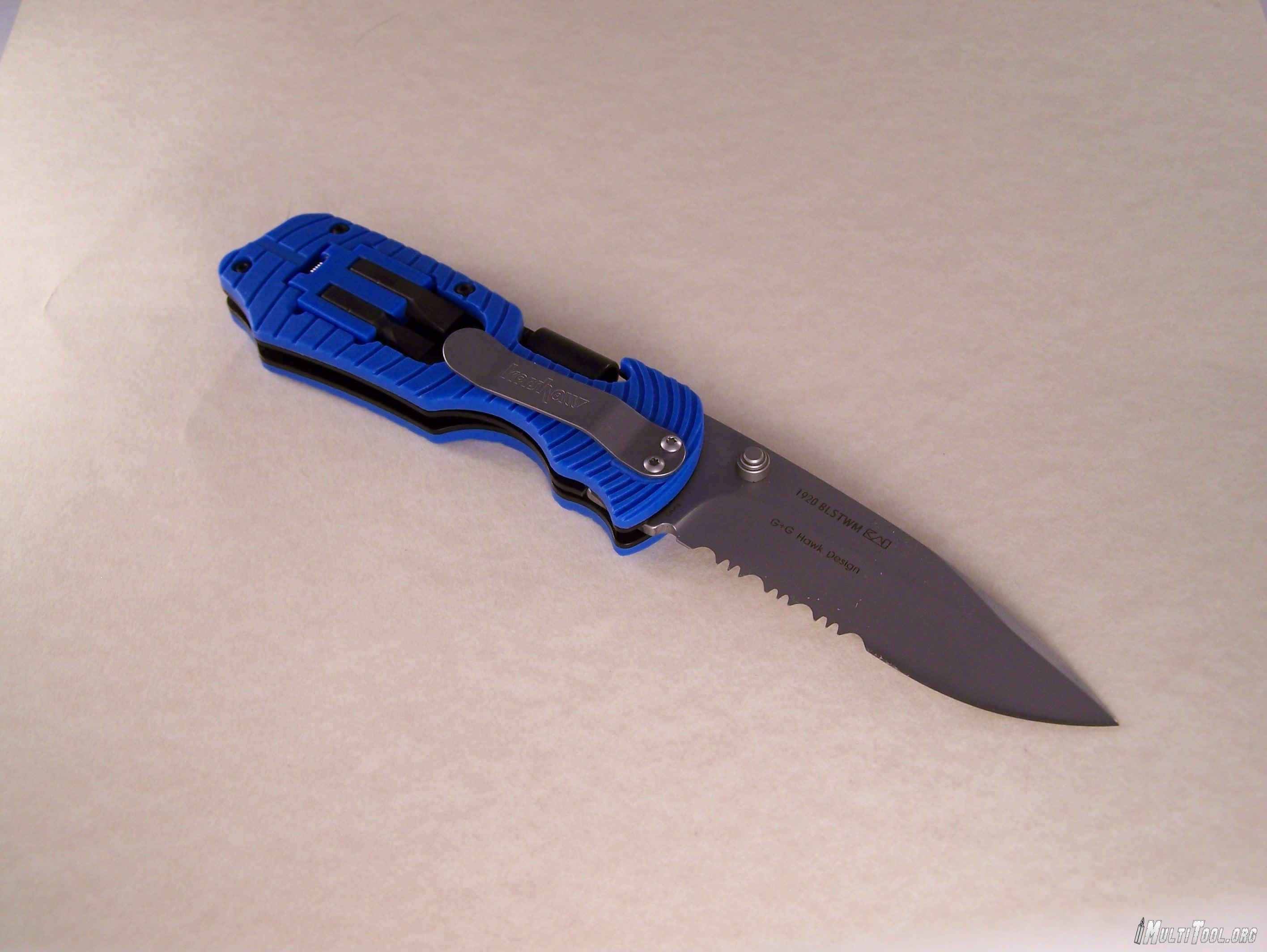 Not a bad deal as it is, but wait, there’s more! 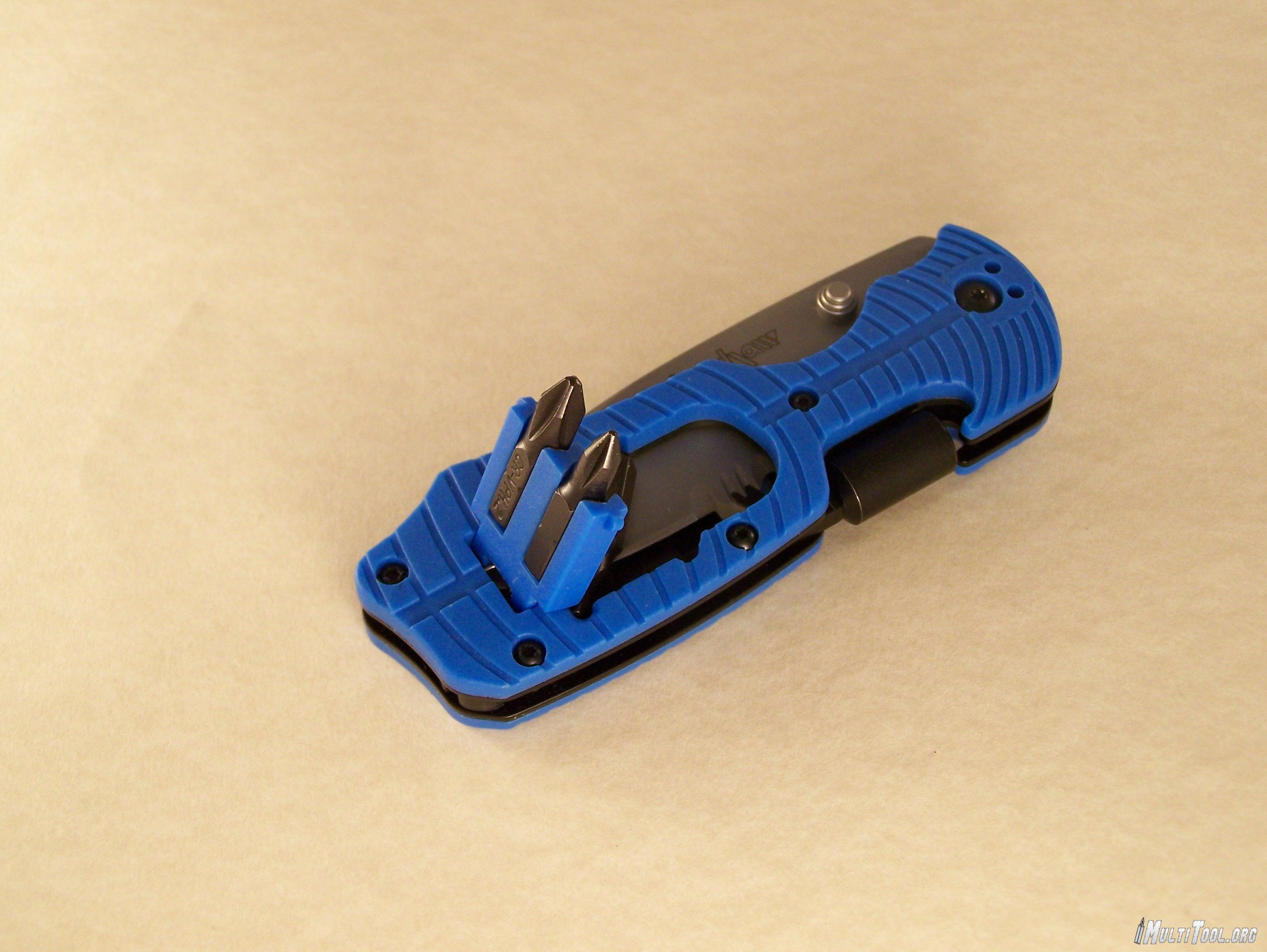 While that may sound like an infomercial come on the reality is that it’s accurate with the Select Fire because there is more. Immediately obvious with this knife is the bit holders built into the handles, each carrying two bits per side- a Phillips #1 and 2 on one side and a medium and large flathead on the other. The neat thing is that unlike many other bit carriers, these are friction fit and spring loaded, so once the bit is out the carrier snaps back into place in the handle on it’s own. This isn’t a huge deal when you are talking about use but it ensures that the bits won’t come out when you carry or are using the knife. It is an extremely handy way of carrying the bits and doesn’t add a significant amount of width to the handles. The only real drawback, if you could call it that is that these are single ended bits- the simple addition of double ended bits would allow the user to have a greater selection available. As a Canadian I like to have Robertson bits handy and a couple of Torx wouldn’t be out of the question either, especially since the pivot pin, handle screws and pocket clip screws are all Torx types. It would be nice to have the ability to maintain the tool on board the tool. The up shot is that these are standard 14” hexagonal bits so they can be replaced easily enough if you lose them, break them or just want a different arrangement. 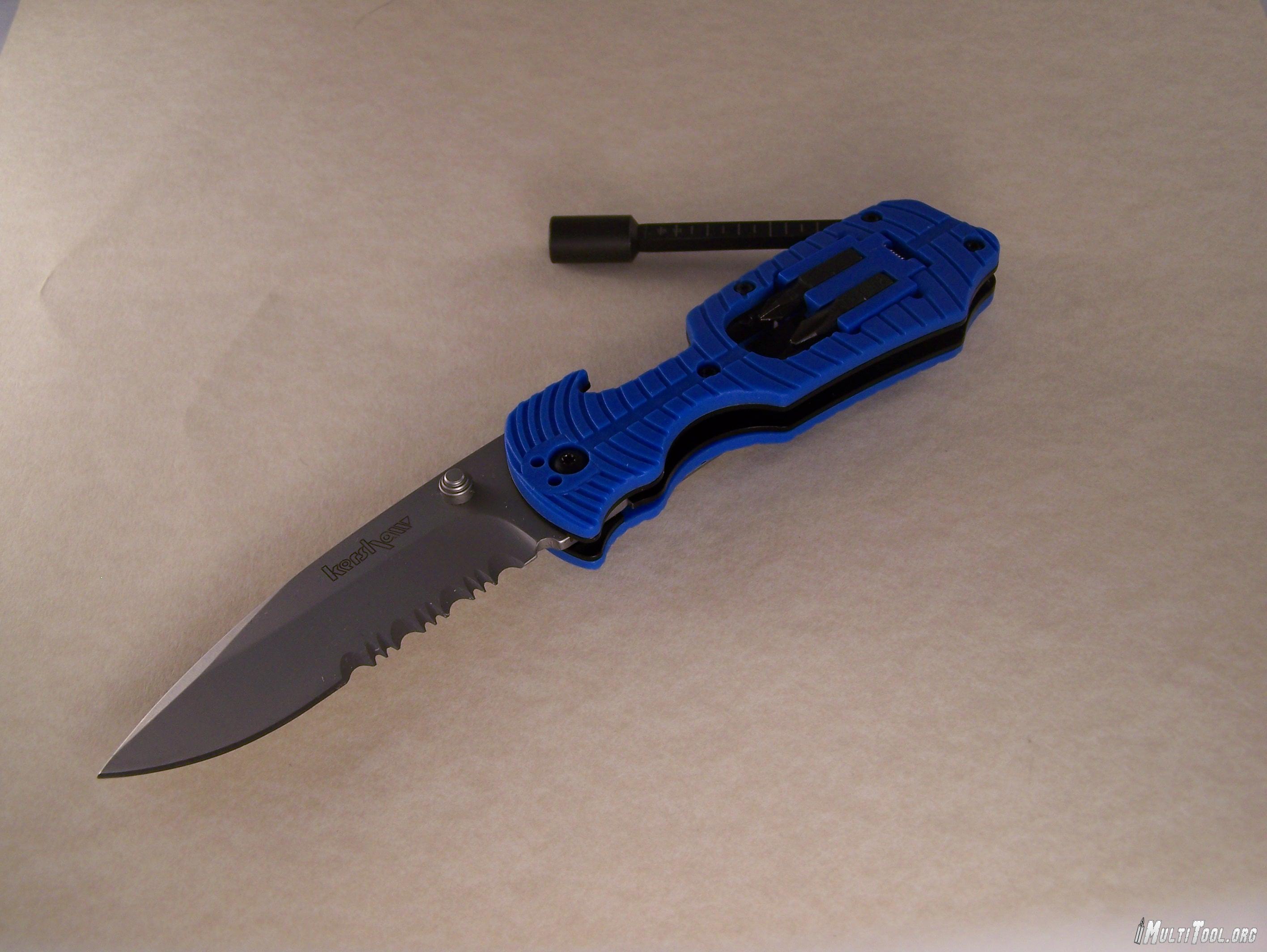 Bits by themselves are more or less useless though, so Kershaw included a lengthy bit driver along the spine of the knife, in another stroke of simple genius. Tool knives tend to be more of a compromise than most multitools as they try to sacrifice function for size (or vice versa) but the Select Fire doesn’t have that issue- not only does the bit driver not add any serious bulk, it also gives a good 2 and a half inch (about 6.5cm) reach, not counting the bits themselves. There are very few if any multitools on the market that can come close to that. And, as if to add insult to injury, Kershaw goes the extra mile and includes a small graduated scale on either side- millimetres on one side and inches on the other. Admittedly this small scale has very limited function but it beats out not having anything.

The Kershaw has another trick up its sleeve though. The slot cut out of the handle for the head of the bit driver has a small extra slot cut in it so that the Select Fire can also perform the most important multitool function of all- the opening of bottles. It’s not a great bottle opener, but it certainly is functional enough- professional bartenders may not want to use it but the average Joe using it to open a drink here and there is not going to be disappointed. I generally prefer a lifter style opener while this is a push down style opener, but it’s not as bad as some I have used. 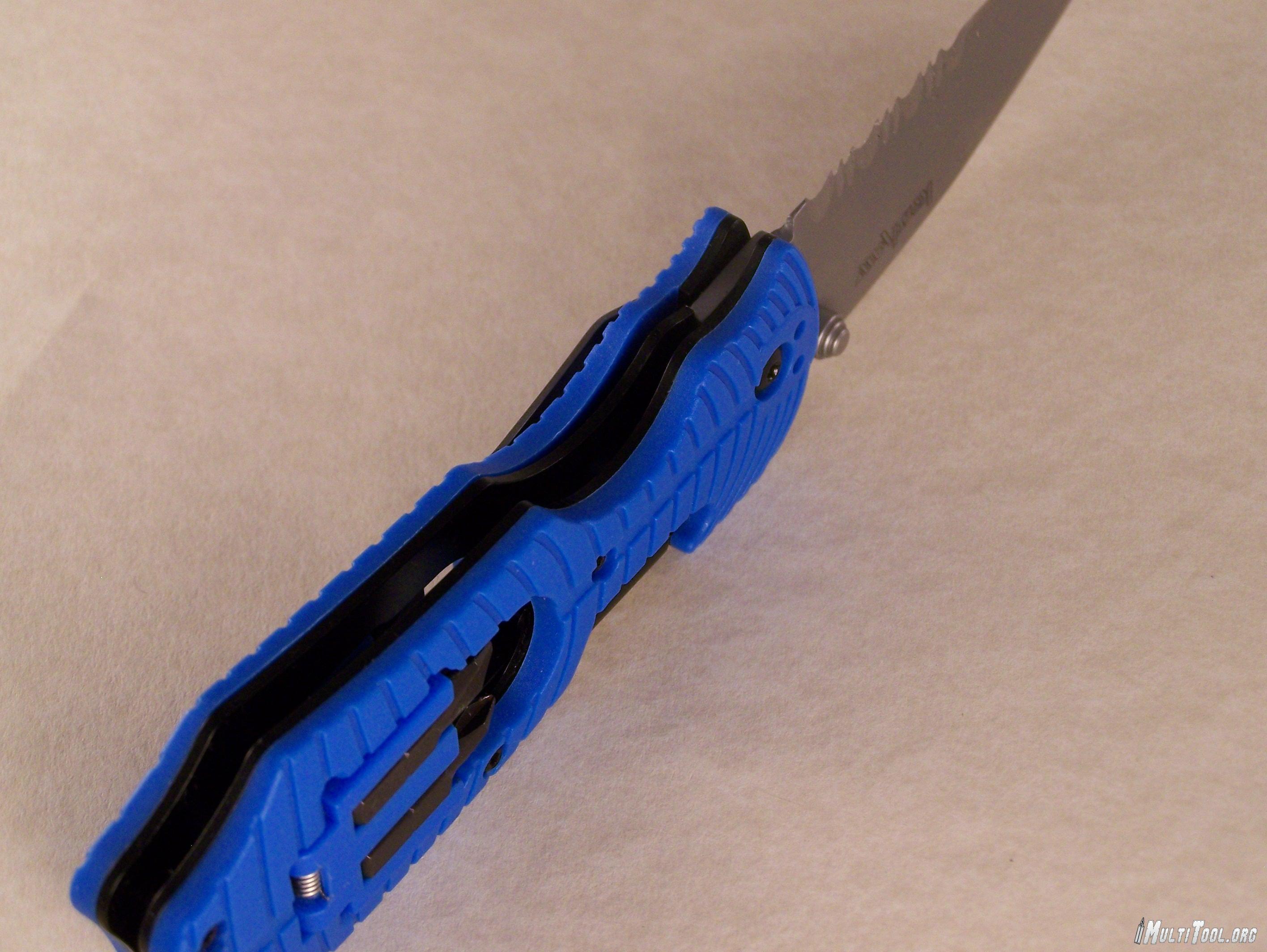 Overall the Select Fire is a great knife and is available at an excellent price. It represents a great value but it’s not perfect- but then what tool is? Luckily they are few and nitpicky and overall I feel that this is a great knife for just about everyone- assuming of course that you don’t live in an area where one handed opening or locking blades are not illegal.

More in this category: « Bear & Son Mini Bear Jaws Review Husky 14 in 1 Tool Review »
back to top
Interested in this or a different tool and still have more questions?
Why not join us over on the Multitool.org Forum where our community can help you find what you're looking for!