Early last year the tool world was all abuzz about the new Guppie multitool from CRKT. It was based on a wrench platform and had a form factor like no other device that comes to mind. In 2008 the Guppie gave birth to an offspring that was designed to be precisely 50% lighter than the original. Fittingly called the Li’l Guppie, this new gadget from CRKT seems to be targeted at the keychain tool niche currently occupied by such tools as the Leatherman Micra, SeberTool M4 and SOG CrossGrip. 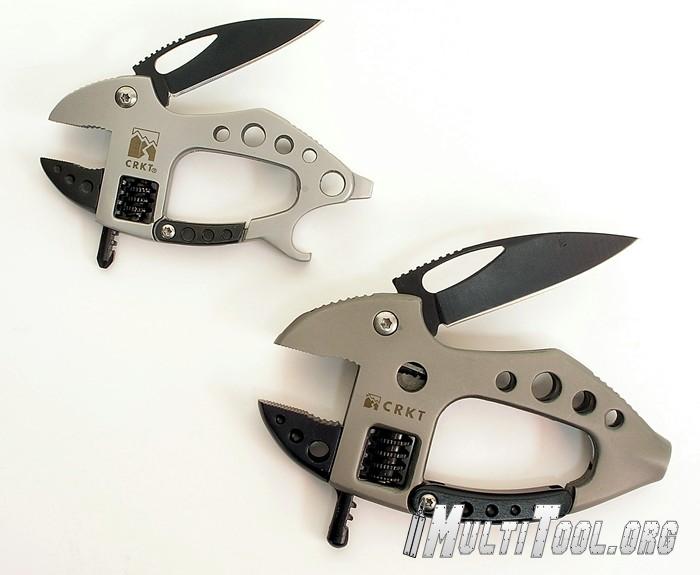 As a birthday gift (from myself!) I received one of these Li’l Guppies about two weeks ago and have had a bit of time to play with it since. It’s proven to be very handy, although one must always keep in mind that it is a keychain tool and not expect it to perform tasks more suited to full-size tools. 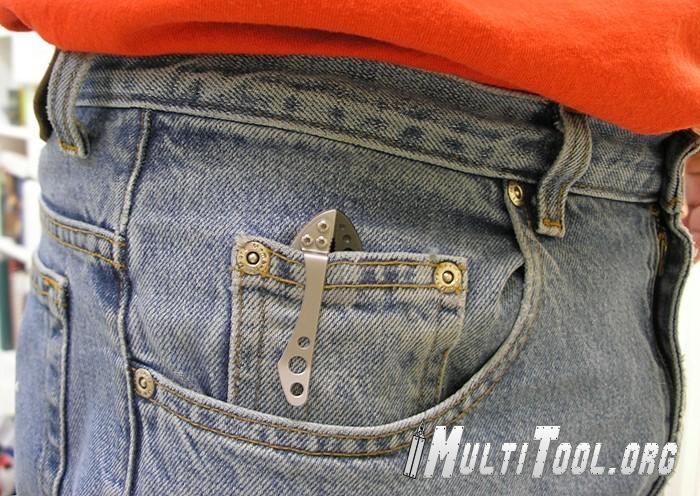 Best thing about the Li’l Guppie is how thin it is. At about 1/4” (7mm) it doesn’t occupy much more space than one of the ToolLogic or Victorinox credit card tools. Pardon the overused cliché, but a person really can forget they are carrying it. Which of course is the real beauty of small tools in that they are hopefully always on your person, not left back at the house like a larger multitool might be.Carry options include a pocket clip and the carabiner that makes up a good share of the frame. 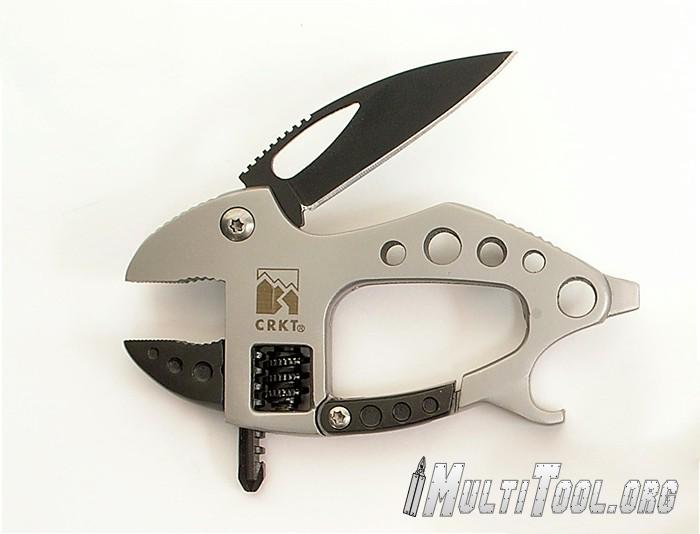 Small size does come at a price though. The wrench jaws on the Li’l Guppie only open up to about 7/16” (11mm) which means the opening is too small for most nuts and bolts. And even though the jaws have a serrated “gripping area” like a set of pliers, the worm nut doesn’t allow you to get a firm grasp on irregular shaped objects like a plier can. I must confess that I haven't found anything suitable yet to use the wrench on. 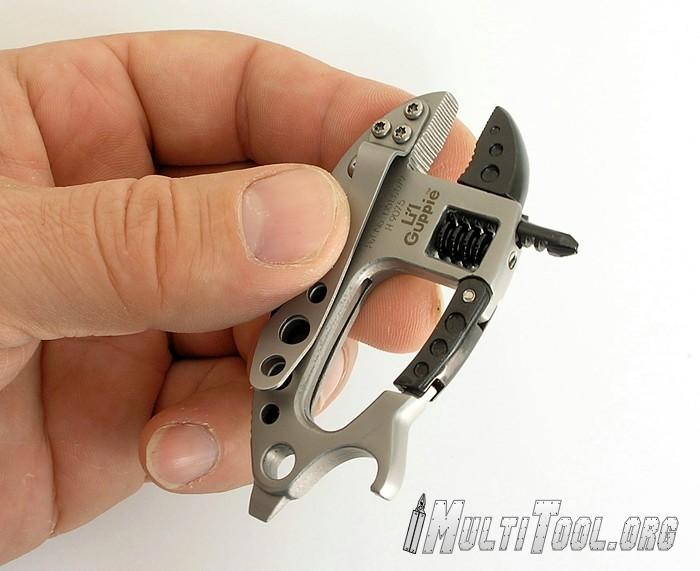 Unlike the full-sized Guppie with its hex bit drivers, the Li’l version has a couple of dedicated screwdrivers. At the base is a flathead screwdriver cast integral with the frame. I’ve not had an opportunity to use it as an actual screwdriver yet, but it does make for a fine mini pry bar. In this regard it is better than the full-sized tool’s hex drivers.On the end of the rack for the movable wrench jaw is a phillips screwdriver. Yes, it is slightly inconvenient to have to open the wrench all the way in order to get at it. And yes, it does wiggle around some during use as the wrench jaw doesn’t fit perfectly snug in its channel. And it certainly needs a lot of clearance in order to use, much like a backspring-mounted phillips screwdriver on a Swiss Army Knife. But the rack-mounted phillips IS better than no phillips at all, and also has the ability to reach into shallow recesses. 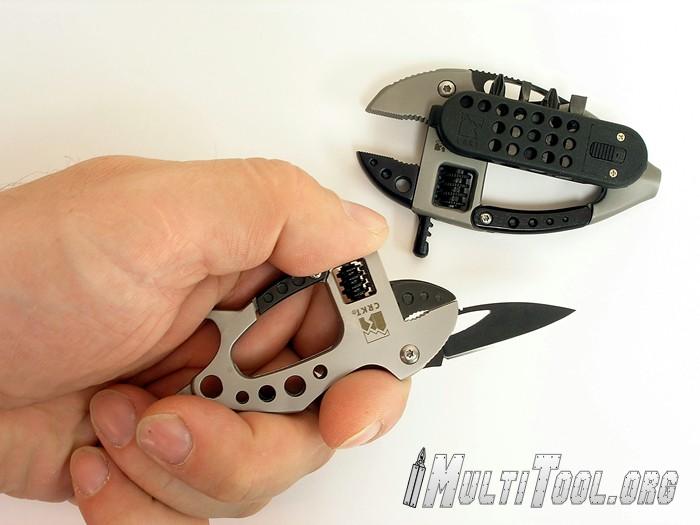 The most-used feature on my Li’l Guppie so far is the knife blade. It has saved my bacon on a couple of occasions already. (Well, it saved my bacon from having to walk a long ways across the shop to get a utility knife. And once while I was up on a ladder!) The knife has a useful Wharnecliffe shape, great for poking holes or picking slivers. The large hole suggests that it can be opened one-handed, but my thumbs are too big and clumsy to manage this properly. Not to be overlooked, a nice big notch in the frame prevents your index finger from sliding up into the sharp area when using. 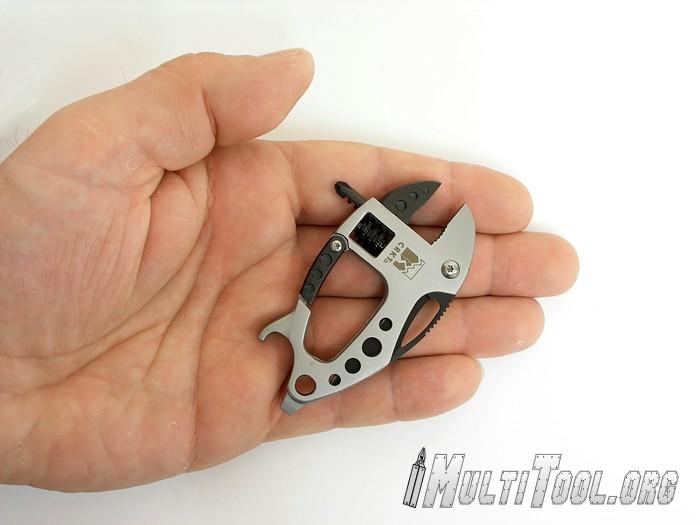 More in this category: « CRKT Zilla Jr. Review CRKT Lumabiner Review »
back to top
Interested in this or a different tool and still have more questions?
Why not join us over on the Multitool.org Forum where our community can help you find what you're looking for!