Rather than add to the existing Juice Series Review already posted here I decided that the KF4 was a standout enough tool to warrant it’s own article. Besides, as a discontinued model (the only discontinued Juice model) it really is in a class of it’s own.

Personally, I don’t see why Leatherman would discontinue a tool like this one. It is fast becoming one of my favorite tools, and despite it’s discontinued status, I find myself carrying it more than any other tool.

First off, here is a breakdown of what makes a Juice a Juice. All Juice models feature a main blade on the outside and on the inside, three varying sizes of flathead screwdrivers, a phillips driver and a folding lanyard ring. The tools on the outside of the Juice are what gives that model it’s individual name (as described by Fred in The Da Juici Code and in this case it is a serrated Knife and diamond file, making a total of 4 implements on the outside, including the main blade and wood saw/awl. 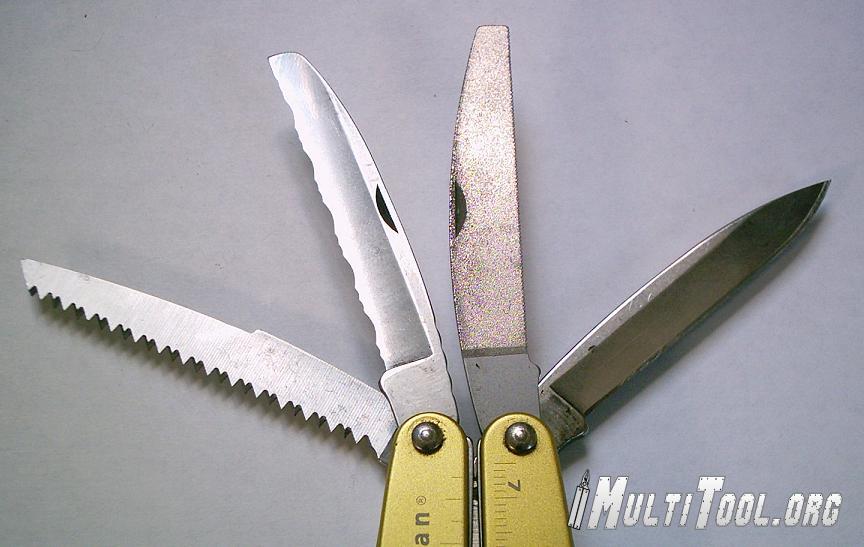 The KF4 has a great selection of tools, but another thing that makes it stand out (besides the bright yellow color) is that unlike the smaller models, the KF4 has a ruler printed on the side. Most multis have some kind of ruler engraved into them but since that would be difficult on a rounded handle tool (notice the SwissTool Spirit doesn’t have a ruler? Same reason) they have simply printed it on. I rarely, if ever use the multitool rulers since most items I want to measure fall invariably fall into the “missing” section under the plier head, but it is something I have come to always expect on a tool.

Also of note is the diamond file. To me, this file should be on every multitool, regardless of manufacturer, and there is no excuse for Leatherman not to have it on every tool they make. Their diamond file is the best file available, and I dare anyone to disprove that statement. The file on the KF4 however loses some parks for not having the groove for sharpening points. The Juice series are supposed to be more leisure oriented, so why not include a fish hook or dart sharpener? It’s just a little gouge in the file and I see little to no benefit for omitting it, and great benefit for keeping it. In fact, it does greater detriment overall to the tool by not being there, since that was the main reason why LM’s files are thicker than those on other tools, but were worthwhile despite sacrificing cutting ability on the saw that is combined with the file. Lose the groove that makes the extra thickness worthwhile, lose the effectiveness of the saw for nothing.

Speaking of saws, this brings me to another flaw in the KF4's design. The wood saw is only half as thick as the channel it sits in, and so Leatherman included an awl to fill in the gaps. On the surface this seems like a great idea, but in practice it seems to have missed something. To extend the saw the user first has to pull out the awl, then the saw pulls out without a problem. The drawback to this is that once the awl is out of the way, there’s nothing to hold the wood saw straight in the channel, which means that it gets bent in and will eventually warp. Had the saw been fitted to the inside of the channel rather than the outside it would have pushed against the inner wall of the channel and be protected from getting bent or warped.

I also have the same question with this model as I did with all the other Juice models, and many other multitools as well- how many flatheads does one person need? At least the 4 and 6 tool Juices have a better tool compliment because of the tools on the outside, but still, 3 out of 5 tools inside being flatheads seems excessive. Especially when one of those other 5 tools is a folding lanyard ring, an implement I have even less interest in than a series of flatheads. Would it have killed them to include a can or bottle opener, nail file, folding scissor, eyeglass screwdriver, etc instead of so many flatheads? 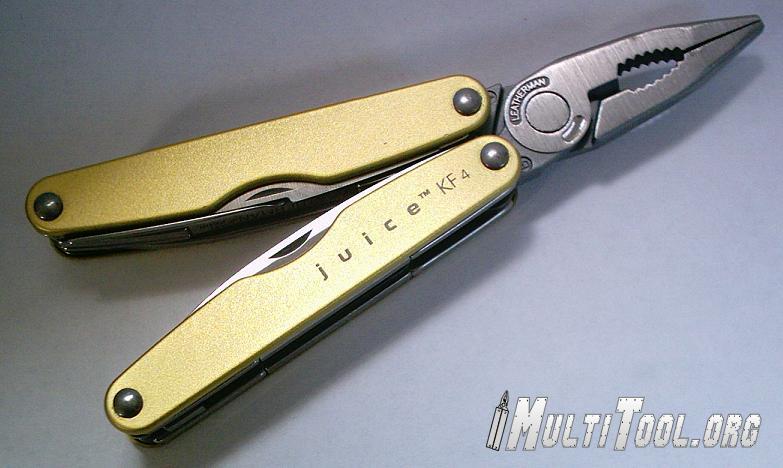 It may sound like I don’t like the KF4, but this is far from the truth. It is so far my favorite Juice model, although I have yet to handle the CS4, XE6 and the fairly rare Pro model. I do however miss the scissors, and would have gladly sacrificed either of the blades in favor of scissors.

In fact, I really like the Juice series for offering a full sized tool in a smaller than full sized package. Leatherman learned a valuable lesson from the Mini Tool, which was also a good idea in theory and should have probably stayed that way.

As with the other Juice models, this one was available in two finishes- standard drab multiool grey or mind numbingly bright yellow. I recommend this one higher than any other model because it has a good tool compliment, is collectible since it is discontinued and since it can be found on closeout in many places quite inexpensively. 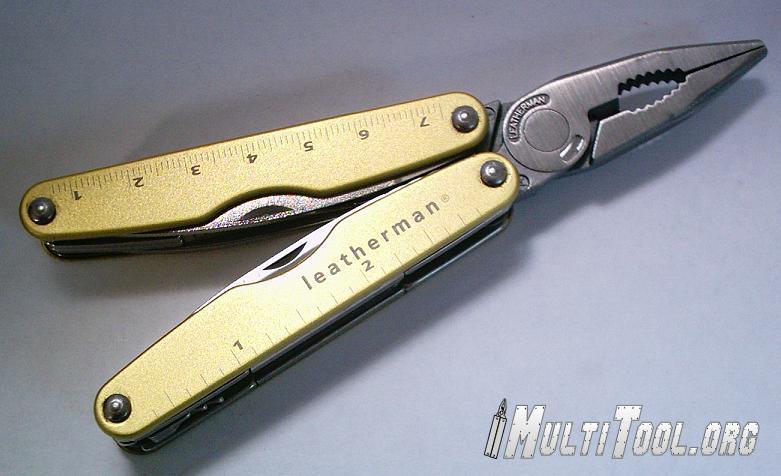 More in this category: « Leatherman Juice Poly Sheath Review Leatherman Charge XTi Review »
back to top
Interested in this or a different tool and still have more questions?
Why not join us over on the Multitool.org Forum where our community can help you find what you're looking for!